According to the preliminary agreement with the Montenegrin- Littoral Metropolitanate of the Serbian Orthodox Church, on June 25, 2019, with the blessing of His Beatitude Metropolitan of Kyiv and All Ukraine, Epiphaniy, the deputy head of the Department of External Church Relations of the Orthodox Church of Ukraine, Archbishop of Chernihiv and Nizhyn Yevstratiy visited Montenegro with a brief visit.

At the entrance to the Cetinje Monastery, which is the official residence of the Metropolitan of Montenegro and the Littoral of the Serbian Orthodox Church, the bishop was met by the representative of the brethren and accompanied to the cathedral where the hierarch worshiped the shrines that are kept there – relics of St. Peter of Cetinje, fragments of the Life-giving Cross and the hand of St. John the Baptist.
After that a sustained meeting with Metropolitan Amfilohije was held in the residence.
Archbishop Yevstratiy handed over the letter of His Beatitude Metropolitan Epiphaniy, as well as memorable gifts – the icon of Archangel Michael and the official calendar of the OCU to His Eminence.

During the meeting, they discussed inter-Orthodox relations, in particular, in connection with the granting by the Ecumenical Patriarch Bartholomew Tomos of the autocephaly to the Ukrainian Orthodox Church. The hierarchs agreed that all should seek ways to establish the unity of Orthodoxy as the One, Holy, Catholic and Apostolic Church.
Archbishop Yevstratiy once again assured the Metropolitan Amfilohije that the Orthodox Church of Ukraine has ecclesiastical and canonical communication only with the Local Orthodox Churches that have such a communication with the Ecumenical Patriarchate, and with nobody else. The wish was also expressed that all problems concerning the Orthodox in Montenegro should be solved in accordance with the church tradition, in the spirit of love and for the good of the devout people.
After dinner with Metropolitan Amfilohije, Archbishop Yevstratiy left for the capital Podgorica, where, accompanied by a priest of the Metropolitanate, he inspected the newly built Cathedral of the Resurrection of Christ.

The same day after the meeting at the Embassy of Ukraine, Archbishop Yevstratiy departed for Kyiv.
Below is the full text of the letter of His Beatitude Metropolitan Epiphaniy:

To His Eminence AMFILOHIJE,
Metropolitan of Montenegro and the Littoral,
Serbian Orthodox Church

Your Eminence beloved brother in Christ.

With sorrow I am writing this personal letter to Your Eminence, as without my desire I have disappointed You because of concelebration with the “archimandrite” Boris recently in Kyiv.
However, with full understanding I assure you that this did not happen intentionally, but because in the past we had  communication with the unrecognized jurisdiction of the Orthodox Church in your country, which occurred before the restoration of our communication with the Holy Ecumenical Patriarch and other Local Churches .

What happened on May 25, 2019, was not due to our intentions, but due to inattention, due to the large number of present priests. I understand that this event has caused you sadness, but I want to assure that we, those who make the Autocephalous Orthodox Church of Ukraine, already have church and canonical communication only and exclusively with the Holy Great Church of Christ, our Mother, that is, the Ecumenical Patriarchate, and only with those with whom it has communication, and with no one else.
From Your pastoral and spiritual affairs, I know you as a preacher of the Orthodox faith, and therefore I openly reveal my heart to you and ask you to come to an understanding of what happened in the first steps of our Local Church in the family of the holy God’s Autocephalous Churches.

For a long time we lived in isolation from communion with the Local Churches. That is why, according to the church tradition and consecrated practice of the Church, we appealed to the Ecumenical Patriarch, the only authorized representative to consider such ecclesiastical appeals. And after many appeals and requests, His Holiness the Patriarch Bartholomew took a positive decision on our ecclection (appeal), restoring our church communication, each by its degree, through the church action that was expressed to us through the Pactful Patriarchal Letter. And this is not the first time that something similar happens between us, the Orthodox.

We, who are baptized in Christ, believe not so much in the letter, but mainly in the spirit of the Canons, and certainly above all in virtue of the grace and the Word of God, by which He gave the heirs of the Apostles power “to link and solve” what is happening between people. Therefore, His Holiness, as the Archbishop of Constantinople – New Rome and the Ecumenical Patriarch, restored our communication and took a positive view of our request for the creation of the Autocephalous Local Church of Ukraine.

In December last year His All-Holiness also invited the hierarchs under the command of our brother in Christ, Metropolitan Onufriy, to the Unification Council, since He had already recalled the Letter of his predecessor, Dionysius IV, regarding certain commitments that, if any, had been made ineffective due to a change of the conditions. However, having been called by the Ecumenical Patriarch, the majority of our brothers did not come. This, however, does not mean that we do not like them and do not expect them to come to us.
We love them, and we rejoice, and we expect them to come to the Local Ukrainian Church, to which the honor of Autocephaly was granted from the only one who, at a time when the Ecumenical Councils are not held, has the authority, the Ecumenical Patriarch. After all, all the new Local Churches have received Autocephaly in this way and follow the path of salvation.

With these words, I appeal to You, Your Eminence, that we are looking forward to the time when we will be able to share with you the one Eucharistic Bowl. Looking forward to meeting you and the opportunity to embrace you all, as the youngest son of the parable, dressed in a refined chiton and a ring of recovery from our common Father. We look forward to welcoming you in our land with all honors and respect.
We are your brothers. You are our brothers. We are no longer separated by anything. We are the one in Christ.

With these fraternal thoughts, I ask You to accept this handwritten letter of ours with request to forgive us for the unpleasantness that occurred not intentionally but because of inattention and hoping that all written above, said from my heart, will reach your heart in the Lord.
I complete this letter with the best wishes and with Christ’s love! 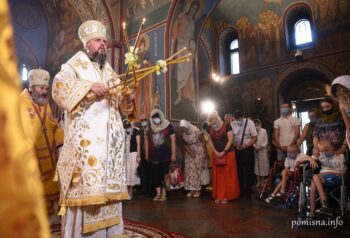